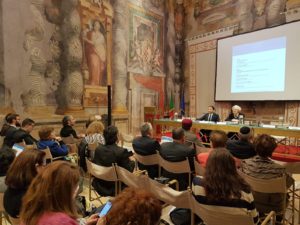 The Religion and Security Council, at the initiative of H.E. Senator Paola Binetti, promoted the organization of the Forum “Interreligious and Intercultural Dialogue in Italy: Challenges and Perspectives”, which took place in Rome on Friday, November 15, in the Zuccari Hall of Giustiniani Palace, Italian Senate of the Republic. The Forum convened decision-makers, religious leaders, scholars, experts, representatives of the media and the civil society, who engaged in a broad discussion on the role of interreligious and intercultural dialogue in the Italian scenario. The proceedings were introduced by H.E. Sen. Binetti, Vice President of the Extraordinary Commission for the Protection and the Promotion of Human Rights, and by RSC Chairman Emiliano Stornelli. 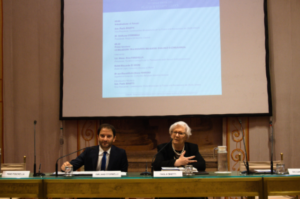 H.E. Sen. Binetti called for “a revolution of dialogue in the Italian politics and public debate”. “Only through dialogue – she said – different views can find a synthesis to be translated into concrete solutions to the current problems, in the name of the common good as a priority for all the actors concerned”. “Italy is going through a very difficult stage, and it is crucial to overcome divisions and promote policies aimed at pacifying the society”, H.E. Sen. Binetti highlighted. To this end, “interreligious and intercultural dialogue can play a major role in mending fences and advancing mutual understanding, fraternity, and unity on the variety of issues relating to the coexistence of different religious identities”. “Today’s encounter between the representatives of three great religions such as Christianity, Judaism, and Islam, shows how the relationship with God can help us to transform every tension into a proposal, into a possible and constructive dialogue, into the recognition of the other”. 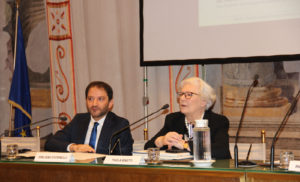 According to RSC Chairman Emiliano Stornelli, “interreligious and intercultural dialogue is an invaluable asset to put an end to the polarization that is undermining the social and cultural fabric in Italy and other European countries”.  “The fault lines in our societies are becoming deeper and deeper, engendering a state of permanent conflict on issues such as identity, citizenship, integration, migration, and relations between religions and cultures”, RSC Chairman observed. “If it is not halted soon”, he warned, “this polarization will keep eroding the communal cohesion and give rise to forms of violence which will no longer be just verbal in nature, or limited to protests, altercations, and sporadic attacks. There are already many indicators and worrying signals thereof, which should not be ignored or minimized”.

In this context, RSC Chairman argued that “a neutral space of dialogue, discussion, and reflection, is as necessary as ever in order to address the ideological strife, which is only producing more divisions and fragmentation, without leading to any resolution of the current problems”. “Today’s Forum – he concluded – aims to contribute to the creation of this neutral space, where interreligious and intercultural dialogue can play a key role in strengthening and, if necessary, rebuilding and repairing, the common foundations of the Italian society, lest a further aggravation of the internal conflicts”. 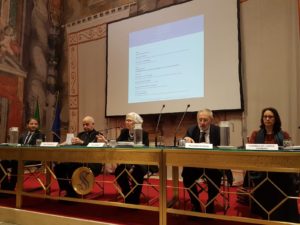