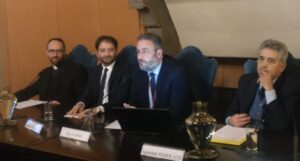 Religious Extremism; Migration; Diminishing Numbers; Economic Exclusion; Political Oppression; Internal Divisions; Weary Political Institutions; Religious Institutions that are not fulfilling their role; Religious Social Institutions (Education, Health, Charity) that are not as true to their mission. Even more dangerous is the degradation of the Social Fabric (Values, Atheism, Violence, Divorce, Ethics, Apathy, Nepotism), and finally the most dangerous threat of all: the loss of Hope and Faith.

As a Catholic, facing all these existential threats, I turn to my Church for answers and try to read the guidance that it gives me, a guidance that is to a large extent shared by most churches (Orthodox, Syriac, Coptic, Armenian, and Protestant). In my search for an answer, I found the enduring message of the Vatican Diplomacy towards the Christians of the Middle East, different letters on Lebanon and the Middle East, the Synod of Lebanon in 1997, the Synod of the Middle East in 2012, many local churches documents and, more broadly, the Catholic social and political teaching. If I am to summarize all of these in two words I would say: “Partnership and Testimony”.

This is all nice and spiritually deep, but isn’t it too Utopian? Does it really address the needs and does it really appease the existential threat that the Christians of the Middle East are facing? We know for a fact that Christians are under threat. The Christians of Lebanon during the civil war had a serious disagreement with the Vatican, as they thought it is preaching from its ivory tower things that are neither applicable nor useful, and decided to diverge and drift into military adventures. Can one blame them?

Without going into the details of what does the Church mean by “Partnership” and what does it mean by “Testimony”, I tried to count the different options that the Christians of the Middle East can and have tried, classifying them on the scale of “Necessity and Usefulness” axes.

Among the options that I thought were not useful and not necessary I counted: Preaching, Economic Wellbeing, and Smart Local and International Alliances.

Among the options that I thought were necessary at least at times but not very useful on the long run, I counted: Charity work, political partnerships, holding on to traditions, and of course fighting in self-defense.

Among the options that are useful but not absolutely necessary, I counted: Solidarity, Political share and public positions and constitutional guarantees, and international protection by international community.

Finally, I came to what is indispensable and that is an absolute necessity, and what looking back at a long history was the most useful, I counted:

– Standing firm for the values that could be a common ground and shared interest with the majority, and consequently standing firm against the threats to these values. The most important ones of these values for me are freedoms and human dignity. This will allow Christians to be an integral part of their societies and full partners in their struggles and aspirations. A Christian cannot support oppression or dictatorship, even if these dictators claim the protection of minorities, nor an alliance of minorities against the majority, nor a special status for some and segregation from others.

– Acting always as bridge builders and peace makers among all the different components of their societies, and between their societies and the rest of the world, proving themselves to be an added value and need.

– Re-discovering the hidden plan of God, and the mission that they have as Christians and what “His Will” that they should allow “To Be Done”, even if it means unlimited sacrifice, and martyrdom. Learning how to give meaning to their presence in the Middle East, and Practicing their Faith in a daily way without schizophrenia, without westernization, without despair, without utilitarianism. Finally Trusting that what allowed them to survive for 2000 years in spite of all atrocities and persecution, are not decisions they have taken over the years but the partnerships they have built and the testimony they have reflected. (This definitely is a step that cannot be achieved without a significant revival and reform of the oriental churches).

Fulfilling this vocation and establishing this functioning and principled model of common living, is not simply the only viable option that the Christians of the Middle East have, but also much more than that: it is a need for all humanity and for a world drifting towards individualism, radicalism, and confrontation. The best response to the “clash of Civilizations” is a successful model of inter-religious dialogue and of common living coming out of the land that is the birthplace of the three Abrahamic religions, led by the Christians of the Middle East. Are we up to the challenge?

Dr. Elie Al Hindy is Associate Professor at the Notre Dame University-Louaize and Director of the Middle East Institute for Research and Strategic Studies.