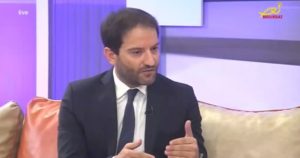 “To promote interreligious dialogue and cooperation between Christians and Muslims as the way forward to advance peaceful coexistence and societal harmony in Tripoli and throughout northern Lebanon”. This is the goal of the first “Tripoli Human Fraternity Day” on The Future of Christian-Muslim Relations after Pope Francis’ Mission to Abu Dhabi, as highlighted by RSC Chairman Emiliano Stornelli in an interview for Télé Lumiére Noursat.

The “Tripoli Human Fraternity Day” will take place at the St. Francis Convent in Tripoli-Mina, on Sunday, October 6, under the auspices of the Pontifical Missionary Union, the Pontifical Mission Societies-Lebanon, and the Custody of the Land. The Religion & Security Council (RSC) is playing a major role in the organization of this historical interreligious initiative, along with Dialogue for Life and Reconciliation (DLR), headed by Prof. Ziad Fahed, Notre Dame University-Louaize, and the Sustainable Network of Religious Leaders in the North of Lebanon.

The proceedings will revolve around the Document on “Human Fraternity for World Peace and Living Together” signed in Abu Dhabi by Pope Francis and the Grand Imam of Al Azhar, Sh. Ahmad El Tayyeb. “The signing of this Document – RSC Chairman noted during the interview – has opened new prospects for interreligious dialogue and cooperation as instruments of peace-building and conflicts resolution in the Middle East, Lebanon included. Tripoli, in particular, experienced repeated conflicts over the past few decades and deserves special attention”.

Tripoli was one of the main hotspots in the Lebanese civil war and, more recently, went through a period marked by sectarian strife, extremism, and terrorism. In this context, the “‘Tripoli Human Fraternity Day’ shows that Muslims and Christians are willing to join hands and work together for the future of Tripoli as a city of peace, culture and development”, RSC Chairman said.

The proceedings will start in the morning with a Youth Interreligious Forum engaging a delegation of 50 university students and young professionals from the Sunni, Alawi, and Christian communities in Tripoli and North Lebanon. The youths will first take part in a Panel Discussion with religious and lay scholars and experts, who will address Christian-Muslim relations in Tripoli in the light of the “Human Fraternity” Document. Then, they will be divided into Group Works in charge of drafting a statement on “Human Fraternity in Tripoli”. The statement will be read during the Leaders Interreligious Forum scheduled in the afternoon. The Youth Interreligious Forum will be coordinated by DLR President Dr. Ziad Fahed and RSC Chairman Emiliano Stornelli.

The Leaders Interreligious Forum will feature prominent Christian and Muslim religious figures, including Tripoli’s Grand Mufti and the Vatican Nuncio. In the spirit of Abu Dhabi and of the encounter between St. Francis’ and the Egyptian Sultan Al Malik Al Kamil occurred 800th years ago, they will examine the challenges and prospects of Christian-Muslim dialogue in Tripoli before an audience of 300 people. 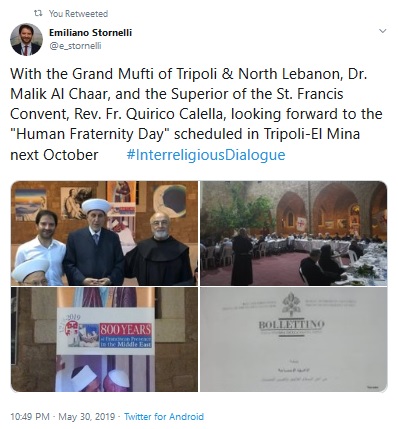 “The ‘Tripoli Human Fraternity Day’ has the potential to inspire a new process of interreligious dialogue and cooperation between Christians and Muslims, who can seize the opportunity to work together for the sake of Tripoli and northern Lebanon”, RSC Chairman told the journalist Lea Adel Maamari, who interviewed also Mr. Amin Brair, RSC Fellow and member of the organizing committee of the event. “The civil society is willing to go forward in this direction, especially the new generation, as demonstrated by the number of youth associations, both Muslim and Christian, engaged in the ‘Tripoli Human Fraternity Day’. The responsibility to follow through with this process in the long term lies in their hands”, RSC Chairman concluded.