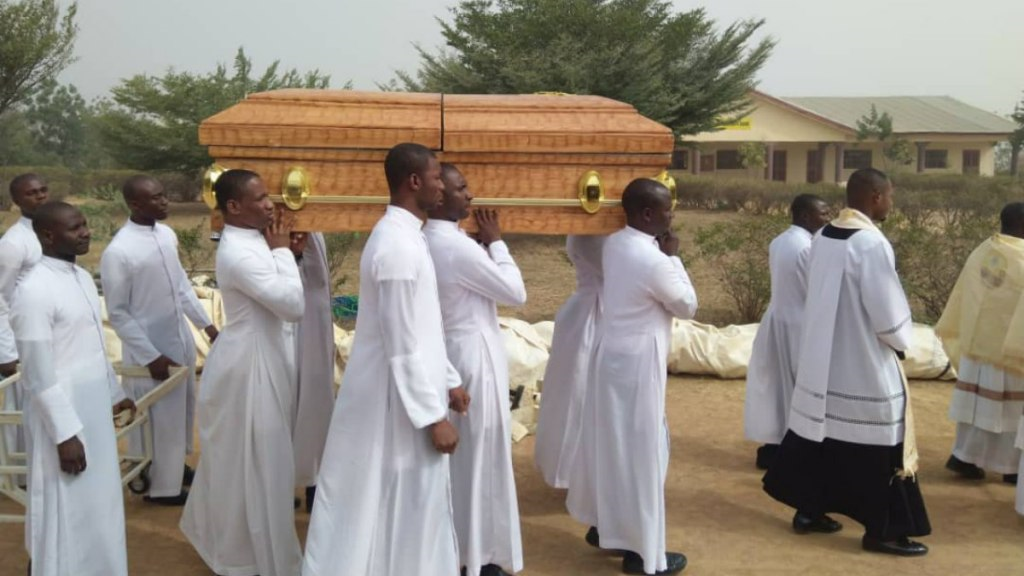 Nigeria is going through a heavy escalation of violence driven by Boko Haram and the Fulani-related conflict. The combination of territorial claims and scarcity of resources with political, religious, cultural, and ethnic elements, have brought about a further deterioration of the security scenario in the north and in other areas of the West-African country. While the whole Nigerian population has long been suffering due to extremism and terrorism, more recently a campaign of killings, abductions, lootings, and intimidations, has been targeting in particular the Christian communities. The latest episode occurred in the north-western Kaduna State, where the 18-year-old Michael Nnadi, a student of the Good Shepherd Major Seminary, and Ms. Bola Ataga, the wife of a local medical doctor, were first kidnapped and then gruesomely murdered by their captors. The tragedy mobilized numerous Christian religious and lay people in the capital Abuja and other places across Nigeria, united in protest to demand increased protection and the introduction of appropriate security measures by the federal government.

THE PREDICAMENT OF NIGERIAN CHRISTIANS
Michael Nnadi was kidnapped on the night of January 8, 2020, with other three seminarians: Pius Kanwai (19), Peter Umenukor (23), and Stephen Amos (23). The latter were released on January 31, but Michael was not spared and his corpse was found 24 hours later near the Kaduna-Abuja highway. Judging by the injuries on the body, he was tortured and experienced a “very painful” death, his twin brother Raphael said in an interview. The corpse of Ms. Ataga was found next to Michael’s. She had been kidnapped on January 24 with her two children, who were instead released.

Two other recent cases of abduction had a positive outcome. Fr. David Echioda, captured on March 1 in the central Benue State, was released on March 3. Earlier, Fr. Nicholas Oboh, also captured on February 13 in the south-western Edo State, was released on February 18, although there are no news about the fate of the several children that, according to local media, were taken along with the priest. Earlier, on January 20, four Christians were ambushed and killed in the central Nasarawa State: Augustine Avertse, a Catholic lay leader, his father Akaa’m, and two more people. On the same day, Rev. Lawan Andimi, a Lutheran pastor, was beheaded by his kidnappers, which had rejected to free him in return for a ransom.

Speaking of beheadings, last December 26, Boko Haram’s ISIS-linked offshoot, the Islamic State in West Africa Province (ISWAP), claimed the slaughter of 11 Christians: one was shot dead, and the others beheaded. The executions were filmed in a video, which was widely circulated on social networks. According to the perpetrators, the victims, all males, had been captured in Borno State, the epicenter of Boko Haram’s so-called insurgency in the north-east, but no details were given about their identities. The bloody Christmas momentum of extremism had actually started on December 24, when seven people were murdered in a raid Boko Haram conducted on a Christian village near Chibok in Borno State.

Chibok is also the town where Boko Haram abducted 276 schoolgirls, mostly Christians, in 2014. 112 of them are still missing, while some are believed to be dead. In 2018, another kidnapping shocked the Nigerian community: 110 schoolgirls were captured by Boko Haram in Dapchi, Yobe State, north-east Nigeria. The only one still in the hands of the terrorist group is the 16-years-old Leah Sharibu. She is said to have refused to convert and to have had a baby with a member of Boko Haram whom she was forced to marry.

To be sure, extremist violence has targeted all Nigerians, Muslims and Christians alike and altogether. Last February 9, a major massacre took place in Auno, a village in Borno State: terrorists belonging to either Boko Haram or ISWAP burned 18 vehicles while their passengers were sleeping inside them. The bulletin reports over 30 dead, both Muslims and Christians, including a pregnant woman, children, and youths. Throughout ten years of warfare, Boko Haram and the Fulanis executed even more bloody massacres, in addition to the continued killing of people almost on a daily basis. The death toll to date has reached 36,000 Nigerians and the displaced are around 2 million, according to estimates of the United Nations.

At the same time, however, it is a fact that sectarianism has taken a leap forward in the conflict, involving the Shia community as well. Boko Haram and the Fulanis “have attacked both Muslims and Christians in the past. But presently, they are focusing mainly on […] Christians”, Archbishop Obiora Akubeze, President of the Nigerian Bishops’ Conference, observed in an interview. Archbishop Akubeze stressed that the protective walls surrounding almost all the seminaries in Nigeria “are not sufficient to stop the attacks of Boko Haram”. Moreover, not all the structures are equipped with security cameras: “If all the seminaries, monasteries, and convents hosting religious people had cameras, it would be useful at least to capture some terrorists”. The churches that request the protection of the police during Sunday masses even “have to pay for the security provided for them”, although just few places of worship can afford it, since the financial resources of the Nigerian churches are very limited.

Against this backdrop, Archbishop Akubeze called on the Western media to make known the “atrocities” happening in Nigeria, so that “the government […] may be put under pressure to act”. Moreover, he urged “the government of EU nations and America […] to seek ways to protect the lives of Christians and all Nigerians who are constantly attacked and killed by Boko Haram and [the Fulani]herdsmen”.

TERRORISM IN WEST AFRICA
Nigeria is not the only country in West Africa to be experiencing a significant escalation of extremism and terrorist attacks. In 2019, according to a report issued by the Washington-based Africa Center for Strategic Studies, radical groups have considerably expanded the scope of their activities both in the Sahel belt and the Lake Chad basin. The Sahel belt (Burkina Faso, Mali, and Niger) has witnessed the highest growth of terrorism in Africa: since 2015, the number of episodes has doubled on a yearly basis, reaching 800 in 2019; fatalities (about 2,600) have also doubled compared to 2018. The Lake Chad basin (Cameroon, Chad, and Niger, besides Nigeria), reported 765 violent events in 2019, with an increase of 35 percent from the previous year; fatalities (about 3,225) were 4 percent more than 2018.

The Lake Chad basin is exclusive to Boko Haram and ISWAP as theater of operations, while the groups responsible for the majority of the attacks in the Sahel belt are the Macina Liberation Front, the Islamic State of the Greater Sahara, and Ansaroul Islam. As noted by Bishop Pierre Claver Malgo, Burkina Faso, each of these groups “has a plan: to occupy the entire Sahel region”. In 2019, Burkina Faso has turned into the epicenter of extremist violence in the Sahel, overtaking Mali as the country with the highest number of episodes. This reflects a growing trend initiated in 2015, which has had a major impact on the population, including the local Christian minority.

Since April 2019, more than 200 Christians belonging to different denominations, clergymen as well as lay people, have been murdered or executed. The most recent attacks occurred on 1 December 2019 (14 victims) and 17 February 2020 (24): in both cases, gunmen fired on the faithful during the services in evangelical and protestant churches respectively. In addition to the killings, Christians are subject to repeated kidnappings, during which “they are always asked to convert and renounce their faith”, Bishop Malgo pointed out, drawing attention also to “the destruction and desecration of Christian religious symbols”.

An Italian missionary abducted in neighboring Niger, Fr. Pierluigi Maccalli, is said to be currently imprisoned in a vast forest in Burkina Faso, where he was brought by his captors. This shows how radical groups can take advantage of the poor border security between states for their terrorist activities across the Lake Chad basin and the Sahel belt.

SECURITY IS KEY TO RELIGIOUS FREEDOM
“Nigeria is on the crossroads and its future hangs precariously in a balance”, Bishop Matthew Hassan Kukah warned during his homily at the funeral mass of Michael Nnadi. “Muslim scholars, traditional rulers, and intellectuals – he noted – have continued to cry out helplessly, asking for their religion and region to be freed from this chokehold”. Regrettably, this is “what happens when politicians use religion to extend the frontiers of their ambition and power”. In Nigeria, Bishop Kukah said, “[the]north has become one large graveyard, a valley of dry bones, the nastiest and the most brutish part of our dear country”; an area that “still has the worst indices of poverty, insecurity, stunting, squalor and destitution”, while “there are no answers to the millions of young children on the streets”.

Bishop Kukah alluded to the lack of a comprehensive plan for economic and infrastructural development to address the “root causes” of extremism in the north. Moreover, he called for the launch of a “nation building” process that would enable the establishment in Nigeria of an “harmonious community”, predicated on an “adequate representation” and an “adequate power-sharing” between Muslims and Christians. For “nation building” to succeed, however, religious freedom is also required. “Denying Christians lands for places of worship across most of the northern states, ignoring the systematic destruction of churches all these years, […] converting Christians while threatening Muslim women and prospective converts with death, […] make the building of a harmonious community impossible”.

As a precondition to ensure religious freedom, and thus peaceful and fruitful interreligious relations, security and stability in north Nigeria and in the rest of the country must be restored. Here is why Bishop Kukah did not hide his disappointment at the failure in the implementation of adequate counter-measures to prevent extremist violence and terrorism  (i.e. enhance the training and welfare of soldiers; develop adequate and modern arms and ammunition; improve intelligence gathering and border patrols “to choke Boko Haram’s financial and equipment channels”).

The “Human Fraternity Document” signed in Abu Dhabi by Pope Francis and the Grand Imam of Al Azhar, Sh. Ahmed Al Tayeb, strongly advocates for increased efforts to thwart “terrorist movements”. In this respect, the primary responsibility in security matters lies with the states and governments, but international organizations and specialized agencies should enhance their role in urging national authorities to enforce (more) effective provisions to protect the faithful of any religion, both majority and minority groups, as well as religious critical infrastructures, from extremist violence and terrorism. If appropriate, they could also provide assistance in the implementation of the necessary security arrangements and mechanisms.

Is the scenario currently facing Nigeria, and many other countries in Africa, not dreadful enough to demand a swift shifting to this approach? There are no other ways to shut down, in Bishop Kukah’s words, “the window that the killers of Boko Haram have exploited and turned into a door to death”.