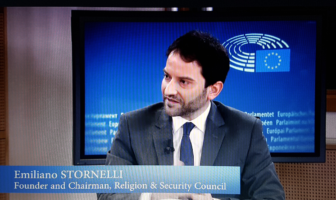 Security is on the top of the EU agenda and is a priority for all EU member states. How do we include Religion into the Security agenda? The answer was provided by RSC Chairman Emiliano Stornelli during a panel discussion organized by GCJH Global Center for Justice and Humanity in Brussels. The discussion was recorded in the media center of the European Parliament on March 7, 2017.

“Today religion and security are very much interconnected”, RSC Chairman said, because “we live in times when religions are exploited to further political goals and armed conflicts. Therefore, the solution to these conflicts and violent extremism passes through the religious sphere as well”.

In this context, the mission of the Religion and Security Council is to “look into the religion and security nexus in order to address it properly, finding a way to use religions to achieve security and peace as a platform for development and respect for human rights in troubled areas and countries”.

“Religions holds a great potential as instruments of peace not just rhetorically”, he went on. In this respect, Interreligious Dialogue is “the best instrument of peace that we can now draw from the religious dimension”.

Facing the challenging security scenario in the Middle East, particularly in Syria and Iraq, “commentators and analysts keep warning that we do not have a strategy to address the sectarian conflict or a plan to address a post-Daesh situation”. Yet, given relevance of the religious factor in regional crises, a valuable “channel to facilitate peace-building and conflicts resolution would certainly be Interreligious Dialogue”.

RSC Chairman thus invited “EU leaders and officials to start considering seriously Interreligious Dialogue as an instrument to be used alongside politics and diplomacy”. A genuine process of dialogue, “bringing together relevant leaders to discuss historical issues and disagreements based on religious grounds, would help ease the work of peace-building”.

“The EU can play a major role, and should pay close attention to the significant steps that have already been taken in this direction”. For instance, “the Organization of Islamic Cooperation urged its members to advance Interreligious Dialogue both within Islam and between Islam and other religions, while Al Azhar University in Egypt has launched major initiatives to counter extremism and radicalization, starting with education and the media. Moreover, Al Azhar and the Vatican are engaged in a growing dialogue”.

According to RSC Chairman, “these and other similar initiatives might have a strong political impact, and should be included in the actual processes of peace-building and conflicts resolution. Interreligious Dialogue would help overcome, or at least mitigate, longstanding hostilities, and for this reason both international organizations and governments should encourage Interreligious Dialogue among contending parties”. “The Religion and Security Council – he concluded – is willing to provide a meaningful contribution to this endeavor”.