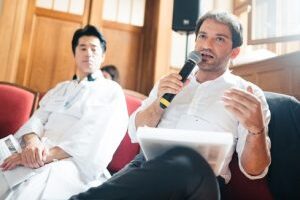 Excerpts from remarks at the panel “Migrants: Fear and/or Compassion?”, Central European Interfaith Forum 2016, Forum of the World’s Religions – Slovakia.

Europe showed a total lack of preparedness in dealing with the longstanding migrant crisis. The repeated calls by Italy and Greece for a comprehensive EU intervention remained largely ignored for years.

The EU took charge of the crisis only when the flow of migrants was approaching the gates of Vienna and Berlin, but at that point in time the only available option was an improvised and uncontrolled reception that European smaller countries refused to accept.

Solidarity toward migrants and refugees is a moral duty consistent with the European core values. However, good migration policies cannot be based only on compassion. A rational governance is needed to effectively address the multidimensional aspects of this phenomenon, involving the political, security, social, economic, religious, and cultural spheres.

Compassion and fear are the two sides of the same coin. If the migration policies of ruling governments and major parties will prove unfit, the population will turn to extremist movements. The recent terrorist attacks and episodes of violence in Germany and France are further ammunition for the far-right.

The rise of far-right movements is also a response to the ideological rhetoric embraced by many politicians and opinion leaders across the board, which is increasingly prompting opposed reactions.

Therefore, only an approach combining “Heart & Reason” can be the guiding star of successful integration policies in Europe.