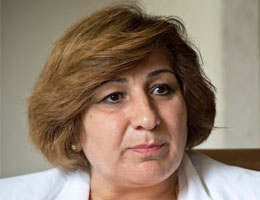 Hon. Pascale Isho Warda is Co-Founder and President of the Hammurabi Human Rights Organization, based in Baghdad, Iraq. As Former Minister of Immigration and Refugees in the Iraqi Interim Government, she has been the first Christian woman to be appointed as Minister in the history of the country. Hon. Pascale Isho Warda is a founding and board member of the Iraqi Women’s Network, and has received numerous international acknowledgments, among them the Best Human Rights Defender Award from the UN Human Rights Council, Middle East and North Africa Division; the Order of the French Parliament; the International Award for Religious Freedom and Human Rights from the U.S. Department of State, along with her husband William Warda. The Hammurabi Human Rights Organization won the U.S. Department of State’s 2012 Human Rights Defenders Award. Hon Pascale Isho Warda took part in many interfaith dialogue initiatives, including at the Holy See (Vatican City), and she is a regular speaker in conferences, seminars, and other events, held inside and outside Iraq, on topics such as religious and ethnic minorities, human rights, women, religious freedom, immigration and asylum policies, de-radicalization and countering violent extremism. A Chaldean Catholic and ethnic Assyrian, she was born in Duhok but later exiled to France; there and later in Syria, she worked with the Assyrian Democratic Movement. In Damascus, she co-founded the Iraqi Society for Human Rights, and led for many years its public relations department. After returning to Iraq in 2001, Hon. Pascale Isho Warda served for six years as Head of the Assyrian Women’s Union, and as external affairs manager of the Assyrian Aid Society-Iraq. She holds an M.A. and a Diploma of Advanced Studies in Human Rights from the Catholic University of Lyon.

RSC Forum: “The Future of Religious Minorities in the Middle East