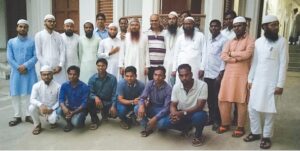 I count it as a blessing to have spent six years studying in two universities in India: two years at the Aligarh Muslim University (AMU) in Aligarh for my Master’s in Islamic Studies, and then, later, four years at Jamia Millia Islamia (JMI) in Delhi for my doctoral studies. I was 34 when I graduated from AMU, and 44 when I gained my PhD degree from JMI.

Paul Jackson, a Jesuit scholar of Islamic spirituality was of the definite opinion that any genuine knowledge of Islam can happen only in the context of living among Muslims, and by engaging in regular friendly contacts and exchanges with them. Therefore, he suggested that I could follow through with my initial studies in Islam by doing an MA in Islamic Studies in Aligarh. He encouraged me that while studying with Muslims I would come to recognize and appreciate how religion is an important part of their lives. He said further: “You will find among your co-students, many who make sincere efforts to adhere to the demands of their faith. Their lives will reflect that their religion is their source of meaning and consolation”. His words proved to be a guiding light for me to enter into the lives of many Muslim friends both in AMU and JMI.

Being a student in these universities gave me a great opportunity to come close to some Muslim friends with whom I could have a sort of ‘faith-sharing’, talking from the heart about life, challenges, joys, and sorrows. There were no debates, there were no arguments, but simply sharing with one another over a meal, over a cup of tea at the university, and the like.

Through these sharings, something that I observed which I found very enriching was that many of these Muslim friends gave, in different ways, great importance to what is called ‘Deen’. At first, I thought that ‘Deen’ is ‘religion’, as is conventionally understood, and that it is mainly about dogmas and social customs. I wondered why these friends gave so much importance to such things. But then I grew to realize that ‘Deen’ is something much deeper. ‘Deen’ for my Muslim friends, I came to learn, is a God-oriented way of life for human beings. A human person has to live in a particular way while on Earth in order to prepare themselves when they appear before God on the Day of Judgment. I recognized that for my Muslim friends, ‘Deen’ means to live in obedience to the will of God through following a specific way, which comprises beliefs, habits, behavior, actions, and character. I learnt that the foundation of these matters is derived from what my Muslim friends believed is God’s guidance given to Prophet Muhammad.

I found something beautiful about the way my Muslim brothers and sisters understood ‘Deen’ as a way of life derived from guidance from God as lived out by the Prophet. It was a way of life rooted in ‘Taqwa’. ‘Taqwa’ is a Quranic term that is translated variously as ‘God-consciousness’, ‘piety’, ‘dutifulness’, ‘Godfearing’, or ‘righteousness’. The Quran says: “Surely the noblest of you in God’s sight is the one with the most Taqwa” (49:13). A Muslim scholar once explained to me the meaning of the expression ‘God-consciousness’ referring to the Qur’anic verse: “O, People, worship your Lord” (2:21), and he told me that the Quran demands the listeners to worship God sincerely by not taking any partner with Him. Affirming the oneness of God and sincerely worshiping God will take one to ‘God-Consciousness’. I felt deeply consoled that Christians along with Muslims can say that we too affirm and worship One God. Both Christians and Muslims can constantly challenge one another to grow in ‘God-Consciousness’.

I discerned three concentric circles in the God-oriented way of life of some of my Muslim friends. One was their own personal life. In both the universities I studied at, some of my Muslim friends made efforts to live in this God-conscious way, and that was something very special for me. How did they try to live in ‘God-consciousness’? Not by simply ritually praying or doing other such things. Somehow their whole life was centered on God, sort of moving around God, moving towards God. So, when they excused themselves to go for prayer, they would do this in a gentle way, not in a flashy manner or to show off. Before I got into an engagement with my Muslim friends, as an outside observer, the prayer seemed to me very mechanical, but that view changed very much after I personally interacted with my Muslim friends. In their personal life, the way they appeared was as very much at ease with themselves, exuding simplicity and joy. I felt that in their personal life, the five times prayer was very inspiring.

The second concentric circle was how these Muslim friends made efforts to obey God’s will in their family life. I learnt from them about some of their practices in this sphere, such as on the occasion of birth, marriage, and death. The third circle was how these Muslim friends observed festivals, the religious significance of the festivals, and how they share their joy with others, not only with fellow Muslims but with others, too. So, I was impressed by all these things, on all these three levels.