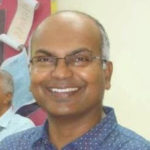 While sociological and anthropological factors are quite necessary for understanding Christian-Muslim relations, it must be noted that theological factors s are foundational and compelling. In India, in a multi-religious and multi-cultural context, An appropriate method to learn about and practice Christian-Muslim relations begins with respectful meeting and ‘faith-sharing’ between Christians and Muslims. Through this practice of meeting and engaging with one another in their deepest levels of their being they can come to recognise one another as co-pilgrims with a common task of striving to obey the will of God in their lives according to their religious convictions and to contribute to justice, peace and harmony.

This essay will present the broad context of India where religious minorities (specifically Christians and Muslims) are socially, culturally and politically divided and marginalised and dominated by groups that use religion politically, a context where we are called to practice interfaith dialogue. The essay also presents and evaluates the methodology for promoting Christian-Muslim relations that Father Paul Jackson, a forerunner in Christian-Muslim relations in India, practiced in training young men and women in their theological formation and as adopted and practiced at Vidyajyoti. The essay also discusses some proposals for future engagements between these two sects of believers to engage in dialogue with one another.