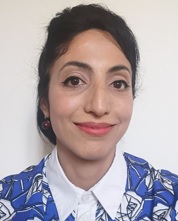 Dr. Sihem Djebbi is a French and Tunisian political scientist specialized in armed conflict, international cooperation, and in the political sociology of the MENA region. After having graduated from Sciences Po Paris in Political Sciences (2005) and in International Relations (2008), she was in charge of the implementation in France of a EU program of long-term settlement in favor of refugees, at France Terre d’Asile (2005-2008), and then a young research fellow at the Institute for Strategic Research at the Military School depending on the French Ministry of Armed Forces (2009-2011). Since 2009, she has been teaching political sciences in France at the University Sorbonne Paris Nord and at Sciences Po Paris. Since 2018, she has been holding courses on interreligious dialogue in the Mediterranean at the Pontifical Theological Faculty of Southern Italy (San Luigi section). She regularly delivers trainings to civil and military personnel intervening in peace and conflict resolution operations, in collaboration with the Post Conflict Operations Study Centre in Turin, the Training Command and Application School of the Army, and with NATO CIMIC Group in Treviso. She also trains theologians (in collaboration with the Italian Association of Theology), humanitarian and social personnel (in collaboration with the French para-public association France Terre d’Asile), and mediators (University of Siena). She intervenes in media programs dealing with crises in the Middle East (France Culture, Radiotelevisione Svizzera di Lingua italiana, Mediapart), and publishes in peer-review journals such as Les Cahiers de l’Orient, Rivista di Teologia dell’Evangelizzazione, Dialoghi, Les Champs de mars.