Tripoli is the city of many names. Some people call it “Bride of the Revolution”, others the city of “openness”, while there is also the stigma that Tripoli is a city of terrorism.

All of these have some truth. We have seen the vibrant revolution in Tripoli, including the demonstrations of the recent months. And we know the history of Tripoli as an open-minded, tolerant, and pluralist city. In the last few decades, unfortunately, we also witnessed its transformation toward extremism, to the point of becoming the hotbed of violent extremist groups.

As in other contexts, this kind of transformation did not happen just because of one single reason. There are many factors behind it. However, the good thing is that this transformation is reversible. Tripoli’s fate is not to forever remain a city of violent extremism, as Tripoli can definitely recover its role as a harbor of diversity and tolerance in the coming future.

Among the reasons underlying the current Tripoli’s predicament, poverty and underdevelopment are among those mentioned most frequently. In some neighborhoods, poverty can affect between 82 percent and 90 percent of the population. This is indeed a worrisome figure, which explains why the youth are becoming vulnerable to being enrolled in violent extremist groups.

Moreover, Tripoli hosts a relatively large number of refugees (Syrians and Palestinians), and this is another factor explaining why the situation in the city remains difficult. 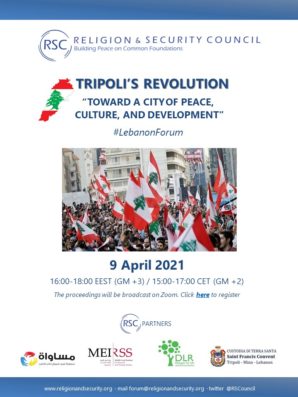 As many other cities in Lebanon, Tripoli has also been a victim of the malicious centralization policy implemented in the country. In recent years, public administration offices were opened outside of Beirut, but those were just cosmetic changes, while the reality on the ground is that the decision-making is still largely centralized.

On the other hand, Tripoli is the birthplace of very successful businessmen and influential figures. Some of them live in Tripoli, where they have their own residences, and many of them ran for elections, so they have their own constituencies. However, the return that they gave back to their city has been so far mostly in the shape of clientelist services, not developmental projects.

Another factor to be considered, and that is usually forgotten, especially by young people, is that Tripoli’s demographics, particularly the different communities living therein, was manipulated by foreign powers. For instance, in the 1980s, the Syrians tempered with the local political dynamics to justify their invasion of the city. The era of the massive Syrian influence ended in 2005, but Tripoli remains vulnerable to manipulation by foreign powers in a considerable fashion also today.

Despite all these negative factors, the transformation Tripoli was subjected to is absolutely reversible. There are many well-intentioned and very good initiatives aiming to steer the historical course of the city toward “peace, culture, and development”, and this is certainly encouraging. However, among the solutions being pursued, there is one missing element, that is a strategic master plan to address the various areas that are underdeveloped, both economically and socially.

Economic development is tied to the social one. In Lebanon, as much as in other countries of the region, many attempts to address social problems, such as extremism or violence, through the creation of economic opportunities have failed. Why? Because they were only focused on providing the youngsters with some income, without offering them prospects of social mobility. Therefore, to advance social justice in Tripoli entails the implementation of an economic agenda that, besides the creation of earning opportunities, would ensure an upward social mobility for those who are involved, first and foremost the new generation.

Last but not least, it is necessary to work for social cohesion. There are already many valuable initiatives being deployed by the different civil society organizations, but there is never enough of these efforts. The strengthening of social cohesion is key to turning the tide in Tripoli, and thus needs to be pursued as a priority objective by any economic and social development plan aimed at building a city of “peace, culture, and development”.