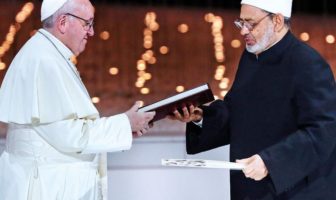 A NEW ERA
Pope Francis’ visit to Abu Dhabi, United Arab Emirates, has ushered in a new era for the Middle East and the world at large. An era in which the religious factor will no longer be exploited to promote violence, sectarianism, and discrimination, but will be instrumental in taking peace-building and conflicts resolution forward. With the beginning of ISIS decline in Syria and Iraq, moderate religious approaches and actors have gained increasing room in the public domain and discourse, seeking a major role in countering extremism and its terrorist manifestations. Pope Francis’ visit to Abu Dhabi is the culmination of this process and opens up new prospects for an active engagement in the religious dimension of international crises, advancing security through religion.

RELIGION-SECURITY NEXUS
The Document on “Human Fraternity for World Peace and Living Together” signed by Pope Francis and the Grand Imam of Al Azhar, Sheikh Ahmed Al Tayeb, clearly states that terrorism is an instrumentalization of religion and the result of incorrect interpretations of religious texts. This entails a firm commitment by religious leaders to oppose radicalization leading to terrorism and armed conflicts, while forming a new generation of faithful open to the encounter and peaceful coexistence with other religions. The Document puts on top of the security agenda the need “to stop supporting terrorist movements”, outlining the main fields of action: terrorism financing, arms trafficking, cyber terrorism on the internet and the social media. “All these must be regarded as international crimes that threaten security and world peace”. Particular attention was drawn to the “places of worship”. Their “protection” as critical infrastructures is defined as a “duty”, while attacks or threats against them is a violation of both “religious teachings” and “international law”. Moreover, the Document calls for addressing the root causes of extremism “linked to hunger, poverty, injustice, oppression”, which are a fertile breeding ground for the indoctrination and recruitment by extremist groups, especially among the youth.

INTERRELIGIOUS DIALOGUE AND CONFLICTS RESOLUTION
The Document comes out of the proceedings of the Human Fraternity Conference held in Abu Dhabi on the occasion of Pope Francis’ visit. The event featured more than 500 hundred representatives of different religious denominations, and was organized by the Council of Elders, composed of prominent Muslim sages and chaired by the Grand Imam of Al Azhar. Although there is no explicit reference to interreligious dialogue as such, the Document calls for “the adoption of a culture of dialogue as the path; mutual cooperation as the code of conduct; reciprocal understanding as the method and standard”. Dialogue “among believers” is also cited repeatedly in the text, and it is associated to the “promotion of a culture of tolerance, acceptance of others and of living together peacefully”. Therefore, interreligious dialogue is regarded as key to achieving the “universal peace” set at the end of the Document as the major goal of the signatories. In a context where religious-based narratives and ideologies are exploited to justify warfare, interreligious dialogue can greatly help mend possible fault lines within and between religions, and prevent theological or doctrinal differences from being translated into postures triggering confrontational situations. Interreligious dialogue holds the potential to pave the way for a broader historical and geopolitical reconciliation, and is an invaluable instrument of peace-building and conflicts resolution. Along these lines, the Human Fraternity Conference can act as a new platform to build on a new genuine process of interreligious dialogue to address the numerous conflicts that have been marring the Middle East and North Africa until today.

THE PATH OF DIALOGUE
The Conference lays its roots in past initiatives, such as the interreligious summits convened in Mecca and Madrid by the late King of Saudi Arabia Abdullah bin Abdul Aziz in 2008. At that time, however, these attempts to promote reconciliation were put aside by the escalation of tension and the outbreak of all-out wars across the region. In the past few years, the need to turn the tide of ISIS extremism prompted the relaunch of the interreligious discourse. During the 2016 Istanbul summit, the Organization of Islamic Cooperation called for the overcoming of sectarianism and for enhancing ecumenism within Islam. The growing exchange between Al Azhar and the Vatican, and the landmark agreement signed by the Muslim World League and the Pontifical Council for Interreligious Dialogue, set the basis for a new cooperation between Christians and Muslims, along with the meeting between Pope Francis and the Turkey’s President Erdogan held one year ago in Rome. Pope Francis’s visit to Abu Dhabi and the Human Fraternity Conference told the world that the path of interreligious dialogue in the Middle East is once again viable, and that it must be pursued to the end until peace and security are restored. The next steps forward in this direction will be the Pope’s visit to Morocco in March, and the interreligious Conference that the Muslim World League will organize next April in Beirut, Lebanon.

THE ROLE OF CHRISTIANS
This new interreligious momentum must be seized. The embrace between St. Francis and the Sultan, which inspired the theme of Pope Francis’ visit to Abu Dhabi, can trigger reconciliation processes throughout the whole Middle East, including the Gulf which is currently disrupted by a deep internal rift. The first journey of a Pontiff to the Arabian Peninsula has highlighted the major role that Christians are called to play in the Middle East today and in the coming future: moving state and non-state actors, peoples and communities from confrontation back to cooperation and partnership relations. Amid hardships and injustices, Christians now find themselves in the privileged position to lead the way towards peace-building and conflicts resolution in their own countries and the broader region.